If you missed my last post, I wrote a review for the Timekeeper audiobook, which I loved. Check that out! Today, I’m excited to host another stop on the tour to interview Tara. 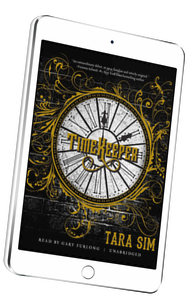 In an alternate Victorian world controlled by clock towers, a damaged clock can fracture time—and a destroyed one can stop it completely.

It’s a truth that seventeen-year-old clock mechanic Danny Hart knows all too well; his father has been trapped in a Stopped town east of London for three years. Though Danny is a prodigy who can repair not only clockwork, but the very fabric of time, his fixation with staging a rescue is quickly becoming a concern to his superiors.

And so they assign him to Enfield, a town where the tower seems to be forever plagued with problems. Danny’s new apprentice both annoys and intrigues him, and though the boy is eager to work, he maintains a secretive distance. Danny soon discovers why: he is the tower’s clock spirit, a mythical being that oversees Enfield’s time. Though the boys are drawn together by their loneliness, Danny knows falling in love with a clock spirit is forbidden, and means risking everything he’s fought to achieve.

But when a series of bombings at nearby towers threaten to Stop more cities, Danny must race to prevent Enfield from becoming the next target or he’ll not only lose his father, but the boy he loves, forever.

What was your inspiration for Timekeeper?

TS: Being in love with Big Ben, haha. One day I wondered what would happen if it could literally control time, and voila.

What did you learn from researching for Timekeeper

TS: I learned a bunch of random facts about the Victorian era, like how people were absurdly morbid and would stop all the clocks in their house to the time of a relative’s death. I also learned a lot about clocks and how they work, although I went cross-eyed at all the terms.

What is the most important thing you want readers to take away from reading Timekeeper?

TS: That you shouldn’t apologize for who you are and what you want.

TS: It’s kind of messy and unorganized, since I don’t have a schedule or daily word count goals. It mostly consists of me writing up a loose outline for the next scene/chapter I’m about to write, then sitting down to write it. I usually won’t stop until I have it all down. I might go back later and read through what I just wrote, but I try not to do it often so that I can just move on to the next part.

If you weren’t a writer, what do you think you’d be doing now?

TS: I honestly don’t know—I’ve always wanted to be a writer! I think it would be cool to be a baker, though.

Thanks for stopping by my blog, Tara! 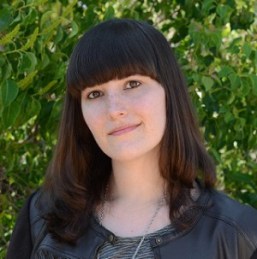 Tara Sim is the author of Timekeeper (Sky Pony Press) and can typically be found wandering the wilds of the Bay Area, California. When she’s not chasing cats or lurking in bookstores, she writes books about magic, clocks, and explosives. Follow her on Twitter at @EachStarAWorld, and check out her website at tarasim.com.

Gary Furlong grew up in Wexford, Ireland. Throughout his life he has worn many a hat: He has worked as a teacher in Niigata, Japan; a puppeteer in Prague; an improv artist in Memphis, Tennessee; and as a singer and actor all over Ireland. He started narrating audiobooks in late 2015 and hasn’t looked back.

Gary made his acting debut in the musical Godspell as a student. Since then he has pursued acting both on the amateur and professional circuits. Notable roles include Tom Collins in Bare Cheek’s production of Rent in 2010.

Over the course of his five years in Japan, he was an actor, director, and audio producer. It was during this time that he discovered his interest in audiobooks and voice-over.

He now works full-time as an audiobook narrator and voice actor from his home in Ireland.

I received this audiobook as part of my participation in a blog tour with Audiobookworm Promotions. The tour is being sponsored by Forever Young Audiobooks. The gifting of this audiobook did not affect my opinion of it.